Z is one of the side characters in Dragon Raja, as well as a recruitable 5-Star Ally.

Z has shaggy, medium length white hair with two strands in the front being longer than the rest. He has pale skin and red eyes. Like the other orphans at Black Swan Bay, he wears a similar uniform but in black.

An orphan of the Black Swan Bay. Doc Herzog did countless crazy tests on him due to his incredible talent.

No one knows what his extra skill is yet, but it seems that it is stronger than his normal one.

His personality fits his appearance. He is a boy that can be graceful or cute.

He has a special bond with Zero / Renata. They met as children in the orphanage at Black Swan Bay and quickly became friends. They made up a plan to escape together and promised to protect each other. On the night of the escape, Z was weak from a test performed on him. This caused Renata to sacrifice herself for him due to their oath. Although it is revealed in later chapters that she is still alive, it's very possible that Z still believes she's dead. Their relationship is best summed up by the quote below:

"We shall never leave each other behind or betray each other until death."

At Lv.1, Z compresses air into a small space, dealing heavy MDMG to up to 5 enemies within 5m and inflicting Slow for 3 sec.

Feel the thickness of the air!

A pact between you and I. 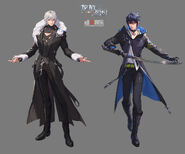 Illustrator: MLin _D (With Johann Chu)
Add a photo to this gallery
Retrieved from "https://dragonrajamobile.fandom.com/wiki/Z?oldid=756"
Community content is available under CC-BY-SA unless otherwise noted.