We're the good folks from the News Society.

Whitewashing is our strong suit!

Finger is one of the supporting characters in Dragon Raja as well as a recruitable 4-Star and 6-Star Ally.

The worst student of Cassell College whose teacher is Professor Guderian. He keeps failing to advance to the next grade as he never wants to learn. He is the only "F" class student in Grade 8 and he is currently the sitter of Luminous. No one knows what his extra skill (nowhere to use), real power (no one concerned), favorite weapon (he had to use a military shotgun once).
He is talented in math and hacking, however, he only hacks the college's system.
He is cheeky and likes to make a fuss, and interested in the rumors and gossips of the college.
Is the former A class student really dumb?

A student of Cassell College with an A Talent rating. Official teacher is Guderian. But in fact, he was appreciated by the vice principal and can be considered a disciple of NightWatcher, Leonardo Flamel.
A German guy with both brains and brawn. Although seems to be unreliable, was the core of the team when performing missions and was assigned several important tasks by the principal.
The only survivor of Project Greenland in 2001. After the death of his girlfriend, EVA, he became depressed and was the only person with a Talent rating of G in Cassell College.

Finegall launches a series of flaming strikes, dealing PDMG to up to X enemies within Xm of the target and increasing PATK and MATK for X sec.

Finger launches a series of flame strikes to deal massive PDMG on up to X enemies in a Xm radius of target and increases character AP Lv.

This your great support of your fate!.

Don't forget that I'm the man known as The Dragonslayer of Flames! 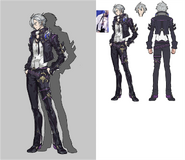